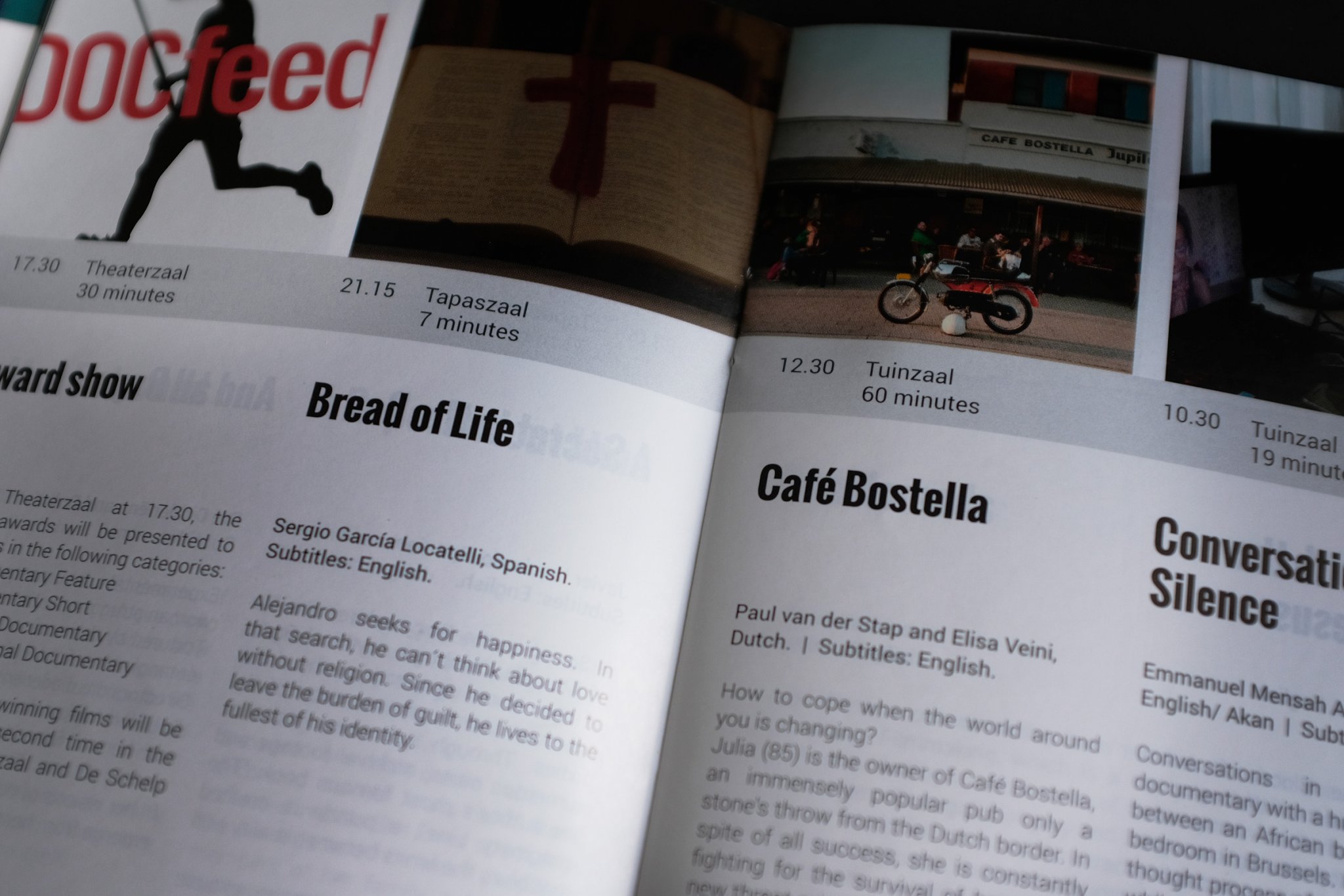 Last weekend, after the screening of Café Bostella on DOCfeed, an emerging documentary film festival in the Dutch city Eindhoven, we did a Q&A session with the public – a thankful opportunity to hear what people really thought of the film on which we have invested no less than 3,5 years of our time and devotion.

The expected polite compliments were there, yes, but luckily people came up with real questions too. People were interested in the well-being of our main character Julia, the present state of the pub (‘Is it still existing?’ – Oh yes!), and how we had coped with the ongoing commuting to the village.

But the question that has given us quite a bit of thought too, was about gaining the confidence of Julia, her family and the pub regulars. Well, that is a story in itself.

From the beginning, we were open about our plans. The deal with Julia was to film for a number of months and then show her a compilation of the footage, so that she could see what we actually were doing in the hours, days and weeks that we were hanging around in her pub. It was our mutual understanding that if there was anything on the film that would harm her pub or position in the village, we would cut it off. Modest as she is, we had no clue if she actually liked what she saw – but then, who would be pleased to see herself on a screen, apart from some narcissists and professionally trained performers? – but she did not object our further filming.

So we carried on. In the end, she and her daughters were the first ones to see the rought cut. Again, a couple of comments here and there, no objection, and we were once more left with no clue what Julia really thought about it.

The regulars’ role turned out pivotal in Julia’s appreciation of the film. In the beginning, the regulars were curious about us, even flattered because we had chosen their pub for filming. But as the months passed by and the film still not had been on television – why film if it is not for TV? – their interest started to wane. Somehow they forgot us; we had become a kind of regulars too.

This was a turning point. Like in anthropological fieldwork, also here what we wanted most was not to be at the center of attention. When we became normal for the regulars, and for Julia, we knew that we also had their confidence. But we still had a way to go.

Then came the special preview for Julia, her family, the regulars, our supporters, friends and everyone around. We were nervous: would they understand the film? Would they like it? The local cinema that hosted the two pre-screenings was full packed. 600 people in the audience. Very much conscious of what they saw; many saw themselves, of people whom they knew. This was personal. But to our great relief, people laughed at the right jokes, which could only mean that they got the nuance. The preview audience seemed to like the film. But Julia?

First she did not say a thing, but when people went to tell her how wonderful it was that the film was there, she finally admitted that she was pleased with the result. She even said that she liked it.

That was all we needed.

Get your own copy of Café Bostella (including DVD of the film) in the Slowdocs webshop.

CAFE BOSTELLA – THE DOCUMENTARY
Read more about Café Bostella on the project pages.