A pub with heart and soul

Essay published in the documentary photo book Café Bostella by Paul van der Stap (photos) and Elisa Veini. (Slowdocs Publishers, 2016. ISBN 978-90-809375-7-4). A DVD of a documentary film with the same title is included in the book.

It will soon be half a century since Julia van den Bergh founded her pub in Essen-Hoek nearby the Dutch border in Belgium. Café Bostella is well known both far and wide due to its unique atmosphere, and its unique host. ‘Bostella should remain as is.’

Essen-Hoek is a one street village similar to many in Belgium. 1400 people live in this town that is characterized by centuries of peat harvesting. Workers have always come and gone. The Church has guarded the village for a long time, just as elsewhere in Belgium and in the Netherlands. The village has a grocery store, a delicatessen, and further along main street, the Moerkantsebaan, a garden center, a hairdresser and a bank. There used to be plenty of pubs: only a couple of years ago there were still three or four left, but these days only one remains: Café Bostella.

Like many pubs, Café Bostella is not impressive on the outside. It is housed in an insignificant square red brick building, partly plastered white, with a flat roof. If you did not know any better, you would drive past it with ease. Inside though, it’s a totally different story: the interior is warm, cosy and welcoming, even at the first sight. Why this is, is difficult to pinpoint. It could be the tablecloths with their oriental motives and the flowered curtains, it could be the knick-knacks in the cupboards and the paintings on the wall. The wood-burning stove, significantly present during the winter, contributes to a general cosiness. This is a place to stay put, you can feel it.

Nobody who knows her could ever imagine that Julia started the pub more or less on a whim. She is one with the pub, a barkeeper personified. Success has not come easy; Julia knows that all too well. It demands perseverance as well as a little bit of good luck. Augmenting that, her firm conviction: ‘What you do, you must do well.’ That attitude has been fruitful: pub regulars come not only for a pint of beer or for socializing, but first and foremost, for Julia.

Julia has an answer to everything, or nearly everything, and offers advice on a wide range of issues: what to do about dry hands? How to cure a broken heart? She listens, remembers, and remains quiet. A good barkeeper does not talk, she says. Listen, and do not say too much. Worries are the reason why people visit the pub. They also seek out each other’s company and some consolation. ‘But’, says Julia, ‘People also come in order to celebrate.’ Still others come with no specific reason, simply because the pub is there and it’s always open. And they come for Julia. If Julia is not there, guests ask for her. She belongs to Bostella, and Bostella belongs to her.

With this in mind, it seems strange that Café Bostella came about by accident. In 1968, Julia and her husband were looking for a flat in Essen. A new factory had just opened its doors and the workers all needed places to stay. As a result, Julia and her husband could not find anywhere to live. There was a pub for sale in Essen-Hoek: a notorious business that had most recently been run by a madame. It was called Zwarte Panter, the Black Panther, and that name was telling. The back door was used more frequently than the front door as the Black Panther was not a place where one wished to be seen. The village was still very traditional back then; it was generally thought that it was better to pretend that the pub did not exist. This however did not stop some villagers from sneaking in through the back door.

It remains a mystery how the pub had gone downhill to such an extent. It had been founded in the 1930’s as Our Place, a common, cosy pub just like hundreds of others. Its downfall was probably due to social change: in the 1950’s, dancings emerged and people started to watch television at home or at their neighbours’. Hence, visiting a pub in the evening was not so important anymore. Another reason was that people became more mobile – the number of private cars rose phenomenally – and daily life was far busier than ever before. Younger generations had their own interests. Yet, when all is said, these changes were only partially true. In 1968, there were still plenty of pubs in Essen and its surroundings. The era of the cosy living room-like pub was not over quite yet. Julia knew this and became a barkeeper.

It was not an easy start for her. The villagers had not a good word to say about Café Bostella. This was not only due to its abject past, but also to the fact that Julia was seldom seen in the village church. A good citizen was supposed to go to church every week as well as participate in all kinds of church activities. Julia was of a different opinion. She was the only person working her pub, and besides that, she had a family to take care of. What was also important to the villagers was that Julia was an outsider, born a couple of kilometers further along, in the village of Heikant. For the villagers, she was not one of ‘us’.

It was only during the annual summer fair that the villagers would even dare to enter the pub. During the fair, Julia placed a hurdy-gurdy inside. Local bands came to play and there was a dance. But the summer peak was not enough to survive. Julia therefore took up organizing cycling races. She even founded a cycling club and served on its board for years. As a board member, she also became a fundraiser: with a collection box in hand she would go door to door in the nearby villages. The cycling races proved to be a clever move as they attracted a lot of people to the pub. Many then kept on returning and now count as regulars.

Over the years, the village became accustomed to Bostella. New generations brought new ideas. The villagers would visit more often, now publicly using the front door. The guests became a more varied group, partly thanks to the increase in leisure time and the new idea that it was alright to do things merely for one’s pleasure. Café Bostella is only one kilometer from the Dutch border, and Dutch bikers and hikers discovered that it was a pleasant place for a break. They were not the only ones: more and more guests started to visit the pub from the entire region, unable as they were to find the same kind of cosiness and openness in Dutch pubs.

It was due to the many guests and the regulars that Julia survived the most recent crisis that was fatal to many: the smoking prohibition that has now also been valid for small pubs for the last two years. Clearly the guests do not only come for the friendly priced beer and a smoke, they also come for Julia and for Bostella. For each other’s company too.

No matter who it was we spoke to, all the guests told us that they wanted the pub to ‘remain as is’. Undoubtedly, nostalgia plays an important role here for the past is omnipresent in Bostella. The interior dates from bygone times: imagine the tablecloths, the wood-burning stove, the paintings depicting rural life. Nevertheless, Café Bostella stands firmly in the present. It is, in Julia’s words, ‘simple and good’. The local newspaper lies on the table and the radio plays all the newest hits.

Julia sells all kinds of goods and food items in the pub, giving the guests yet another reason for not wanting to miss it all. The goods lay spred on the billiard table and in the back corner of the pub. In earlier times, many pub owners also ran a shop next door, a grocery or a hairdresser. Julia started to sell goods without intent. People would ask her if they could ‘put away’ shirts, shoes, leaks and potatoes in the pub and she said yes. Little by little, more people arrived with their strawberries and eggs, the butcher brought sausages and meat. The regulars learned to anticipate the goods; soon it took only a brief second for a new cargo of strawberries to be sold out. The potatoes have become a permanent success: from within the farthest corner of the pub, a farmer sells six, seven hundred kilos of potatoes each week. Julia does not earn a penny on it all; she keeps the shop for the benefit of the guests. That is what you call a true barkeeper.

‘If you like to do something’, Julia says, ‘nothing is difficult. You must do it with heart and soul. And you must do it because you like it and because you enjoy the company of people. It’s not: it has to earn you a fortune. Having money in my wallet: that’s not my motivation. It is part of it, of course but we keep the prices low. It means more work. The people benefit more than we do, because we have to pay set costs. But is more social like this. People enjoy it here; they come for a chat.’

What makes Bostella and other traditional pubs so unique? Earlier this year, the news was that more and more village and neighbourhood pubs in the Netherlands are facing problems. The explanation given was that they remain musty and old-fashioned despite the fact that the world wheels on. They were said to lack innovation. Renewal. If they wanted to survive, they would have to ‘retune and become trendy wine bars or tasting rooms’, according to the Dutch industry association.

Flemish pubs like the Bostella are the opposite of that trend. They thank their legitimacy to remaining themselves: ‘places where you can chat with people’, as Julia refers to it. It is often the case that nobody takes over a pub when the owner dies. Sometimes, the regulars start to run the pub as a collective. This happened with another pub in the province of Antwerp after the host had turned ninety. Such solutions are often short-lived however, and so it turned out there too. But the pub as such should not change: not the living room-like atmosphere, the cheap beer and the good filter coffee, nor the goods piled on the billiard table or the absence of stress and hurry.

Café Bostella is not a relic from times past but a rare opportunity to slow down and connect in the present day. ‘Let it stay as it is now’, say the regulars. Julia adds: ‘There are workhorses and fancy horses. I like to work.’ 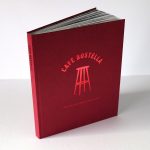 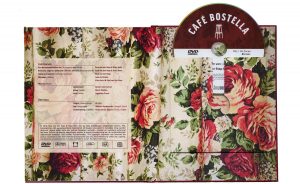 The book (with DVD) is available in the bookshop of Slowdocs Publishers of through your preferred bookshop.